Editor's Note: This post was updated on February 9th, 2016. Adoption numbers reflect state of authentication as of this date.

Now, nearly a decade later, adoption of these standards is widespread across the industry, dramatically reducing spammers’ ability to impersonate domains that users trust, and making email phishing less effective. 97.4% of non-spam emails sent to Gmail users come from authenticated senders as of 2016, a sharp increase from 2013 when only 91.4% of the emails were authenticated. Authentication helps Gmail prevent billions of impersonating email messages a year landing in users’ inboxes.

More specifically, the 97.4% of the authenticated non-spam emails sent to Gmail users come from senders that have adopted one or more of the following email authentication standards: DKIM (DomainKey Identified Email) or SPF (Sender Policy Framework). 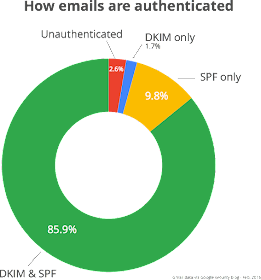 Here are some statistics that illustrate the scale of what we’re seeing:

Join the fight against email spam

As more domains implement authentication, phishers are forced to target domains that are not yet protected. If you own a domain that sends email, the most effective action you can take to help us and prevent spammers from impersonating your domain is to set up DKIM, SPF and DMARC. Check our help pages on DKIM, SPF, DMARC to get started.

When using DKIM, please make sure that your public key is at least 1024 bits, so that attackers can’t crack it and impersonate your domain. The use of weak cryptographic keys -- ones that are 512 bits or less -- is one of the major sources of DKIM configuration errors (21%).

If you own domains that are never used to send email, you can still help prevent abuse. All you need to do is create a DMARC policy that describes your domain as a non-sender. Adding a “reject” policy for these domains ensures that no emails impersonating you will ever reach Gmail users’ inboxes.

While the fight against spammers is far from over, it’s nevertheless encouraging to see that community efforts are paying off. Gmail has been an early adopter of these standards and we remain a strong advocate of email authentication. We hope that publishing these results will inspire more domain owners to adopt the standards that protect them from impersonation and help keep email inboxes safe and clean.
Google Security PR
Share