Speeding up and strengthening HTTPS connections for Chrome on Android

Earlier this year, we deployed a new TLS cipher suite in Chrome that operates three times faster than AES-GCM on devices that don’t have AES hardware acceleration, including most Android phones, wearable devices such as Google Glass and older computers. This improves user experience, reducing latency and saving battery life by cutting down the amount of time spent encrypting and decrypting data.

To make this happen, Adam Langley, Wan-Teh Chang, Ben Laurie and I began implementing new algorithms -- ChaCha 20 for symmetric encryption and Poly1305 for authentication -- in OpenSSL and NSS in March 2013. It was a complex effort that required implementing a new abstraction layer in OpenSSL in order to support the Authenticated Encryption with Associated Data (AEAD) encryption mode properly. AEAD enables encryption and authentication to happen concurrently, making it easier to use and optimize than older, commonly-used modes such as CBC. Moreover, recent attacks against RC4 and CBC also prompted us to make this change.

The benefits of this new cipher suite include: 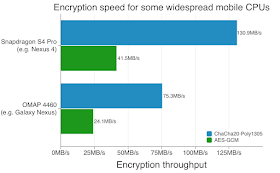 As of February 2014, almost all HTTPS connections made from Chrome browsers on Android devices to Google properties have used this new cipher suite. We plan to make it available as part of the Android platform in a future release. If you’d like to verify which cipher suite Chrome is currently using, on an Android device or on desktop, just click on the padlock in the URL bar and look at the connection tab. If Chrome is using ChaCha20-Poly1305 you will see the following information: 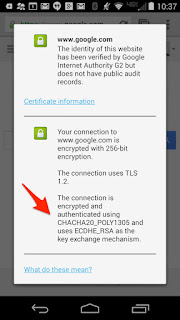 ChaCha20 and Poly1305 were designed by Prof. Dan Bernstein from the University of Illinois at Chicago. The simple and efficient design of these algorithms combined with the extensive vetting they received from the scientific community make us confident that these algorithms will bring the security and speed needed to secure mobile communication. Moreover, selecting algorithms that are free for everyone to use is also in line with our commitment to openness and transparency.

We would like to thank the people who made this possible: Dan Bernstein who invented and implemented both ChaCha/20 and Poly1305, Andrew Moon for his open-source implementation of Poly1305, Ted Krovetz for his open-source implementation of ChaCha20 and Peter Schwabe for his implementation work. We hope there will be even greater adoption of this cipher suite, and look forward to seeing other websites deprecate AES-SHA1 and RC4-SHA1 in favor of AES-GCM and ChaCha20-Poly1305 since they offer safer and faster alternatives. IETF draft standards for this cipher suite are available here and here.
Google Security PR
Share