Are you a robot? Introducing “No CAPTCHA reCAPTCHA”

reCAPTCHA protects the websites you love from spam and abuse. So, when you go online—say, for some last-minute holiday shopping—you won't be competing with robots and abusive scripts to access sites. For years, we’ve prompted users to confirm they aren’t robots by asking them to read distorted text and type it into a box, like this:

But, we figured it would be easier to just directly ask our users whether or not they are robots—so, we did! We’ve begun rolling out a new API that radically simplifies the reCAPTCHA experience. We’re calling it the “No CAPTCHA reCAPTCHA” and this is how it looks:

On websites using this new API, a significant number of users will be able to securely and easily verify they’re human without actually having to solve a CAPTCHA. Instead, with just a single click, they’ll confirm they are not a robot.
A brief history of CAPTCHAs

While the new reCAPTCHA API may sound simple, there is a high degree of sophistication behind that modest checkbox. CAPTCHAs have long relied on the inability of robots to solve distorted text. However, our research recently showed that today’s Artificial Intelligence technology can solve even the most difficult variant of distorted text at 99.8% accuracy. Thus distorted text, on its own, is no longer a dependable test.

To counter this, last year we developed an Advanced Risk Analysis backend for reCAPTCHA that actively considers a user’s entire engagement with the CAPTCHA—before, during, and after—to determine whether that user is a human. This enables us to rely less on typing distorted text and, in turn, offer a better experience for users.  We talked about this in our Valentine’s Day post earlier this year.

The new API is the next step in this steady evolution. Now, humans can just check the box and in most cases, they’re through the challenge.

Are you sure you’re not a robot?

However, CAPTCHAs aren't going away just yet. In cases when the risk analysis engine can't confidently predict whether a user is a human or an abusive agent, it will prompt a CAPTCHA to elicit more cues, increasing the number of security checkpoints to confirm the user is valid. 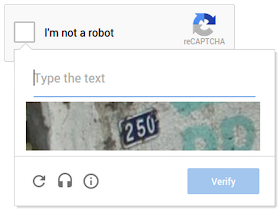 This new API also lets us experiment with new types of challenges that are easier for us humans to use, particularly on mobile devices. In the example below, you can see a CAPTCHA based on a classic Computer Vision problem of image labeling. In this version of the CAPTCHA challenge, you’re asked to select all of the images that correspond with the clue. It's much easier to tap photos of cats or turkeys than to tediously type a line of distorted text on your phone. 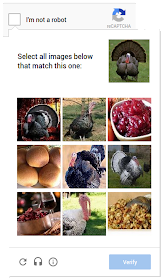 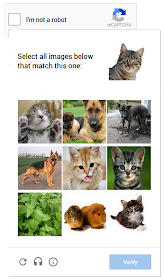 Adopting the new API on your site

As more websites adopt the new API, more people will see "No CAPTCHA reCAPTCHAs".  Early adopters, like Snapchat, WordPress, Humble Bundle, and several others are already seeing great results with this new API. For example, in the last week, more than 60% of WordPress’ traffic and more than 80% of Humble Bundle’s traffic on reCAPTCHA encountered the No CAPTCHA experience—users got to these sites faster. To adopt the new reCAPTCHA for your website, visit our site to learn more.

Humans, we'll continue our work to keep the Internet safe and easy to use. Abusive bots and scripts, it’ll only get worse—sorry we’re (still) not sorry.
Google Security PR
Share