We launched our Vulnerability Reward Program in 2010 because rewarding security researchers for their hard work benefits everyone. These financial rewards help make our services, and the web as a whole, safer and more secure.

With an open approach, we’re able to consider a broad diversity of expertise for individual issues. We can also offer incentives for external researchers to work on challenging, time-consuming, projects that otherwise may not receive proper attention.

Last January, we summarized these efforts in our first ever Security Reward Program ‘Year in Review’. Now, at the beginning of another new year, we wanted to look back at 2015 and again show our appreciation for researchers’ important contributions.

Here's an overview of the rewards they received and broader milestones for the program, as a whole. 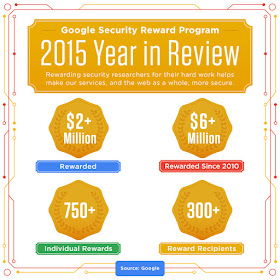 Android was a newcomer to the Security Reward program initiative in 2015 and it made a significant and immediate impact as soon as it joined the program.

We launched our Android VRP in June, and by the end of 2015, we had paid more than $200,000 to researchers for their work, including our largest single payment of $37,500 to an Android security researcher.

Last year, we began to provide researchers with Vulnerability Research Grants, lump sums of money that researchers receive before starting their investigations. The purpose of these grants is to ensure that researchers are rewarded for their hard work, even if they don’t find a vulnerability.

We’ve already seen positive results from this program; here’s one example. Kamil Histamullin a researcher from Kasan, Russia received a VRP grant early last year. Shortly thereafter, he found an issue in YouTube Creator Studio which would have enabled anyone to delete any video from YouTube by simply changing a parameter from the URL. After the issue was reported, our teams quickly fixed it and the researcher was was rewarded $5,000 in addition to his initial research grant. Kamil detailed his findings on his personal blog in March.

We continued to see important security research in our established programs in 2015. Here are just a few examples:
We also injected some new energy into these existing research programs and grants. In December, we announced that we'd be dedicating one million dollars specifically for security research related to Google Drive.