No, Chrome isn’t killing ad blockers -- we’re making them safer
Posted by Devlin Cronin, Chrome Extensions Team
The Chrome Extensions ecosystem has seen incredible advancement, adoption, and growth since its launch over ten years ago. Extensions are a great way for users to customize their experience in Chrome and on the web. As this system grows and expands in both reach and power, user safety and protection remains a core focus of the Chromium project.
In October, we announced a number of changes to improve the security, privacy, and performance of Chrome extensions. These changes include increased user options to control extension permissions, changes to the review process and readability requirements, and requiring two-step verification for developers. In addition, we’ve helped curb abuse through restricting inline installation on websites, preventing the use of deceptive installation practices, and limiting the data collected by extensions. We’ve also made changes to the teams themselves — over the last year, we’ve increased the size of the engineering teams that work on extension abuse by over 300% and the number of reviewers by over 400%.
These and other changes have driven down the rate of malicious installations by 89% since early 2018. Today, we block approximately 1,800 malicious uploads a month, preventing them from ever reaching the store. While the Chrome team is proud of these improvements, the review process alone can't catch all abuse. In order to provide better protection to our users, we need to make changes to the platform as well. This is the suite of changes we’re calling Manifest V3.
This effort is motivated by a desire to keep users safe and to give them more visibility and control over the data they’re sharing with extensions. One way we are doing this is by helping users be deliberate in granting access to sensitive data - such as emails, photos, and access to social media accounts. As we make these changes we want to continue to support extensions in empowering users and enhancing their browsing experience.
To help with this balance, we’re reimagining the way a number of powerful APIs work. Instead of a user granting each extension access to all of their sensitive data, we are creating ways for developers to request access to only the data they need to accomplish the same functionality. One example of this is the introduction of the Declarative Net Request API, which is replacing parts of the Web Request API.
At a high level, this change means that an extension does not need access to all a user’s sensitive data in order to block content. With the current Web Request API, users grant permission for Chrome to pass all information about a network request - which can include things like emails, photos, or other private information - to the extension. In contrast, the Declarative Net Request API allows extensions to block content without requiring the user to grant access to any sensitive information. Additionally, because we are able to cut substantial overhead in the browser, the Declarative Net Request API can have significant, system-level performance benefits over Web Request. 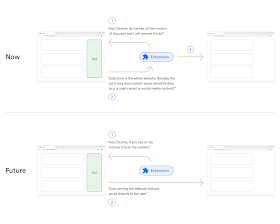 This has been a controversial change since the Web Request API is used by many popular extensions, including ad blockers. We are not preventing the development of ad blockers or stopping users from blocking ads. Instead, we want to help developers, including content blockers, write extensions in a way that protects users’ privacy.
You can read more about the Declarative Net Request API and how it compares to the Web Request API here.
We understand that these changes will require developers to update the way in which their extensions operate. However, we think it is the right choice to enable users to limit the sensitive data they share with third-parties while giving them the ability to curate their own browsing experience. We are continuing to iterate on many aspects of the Manifest V3 design, and are working with the developer community to find solutions that both solve the use cases extensions have today and keep our users safe and in control.
Eugene Liderman
Share