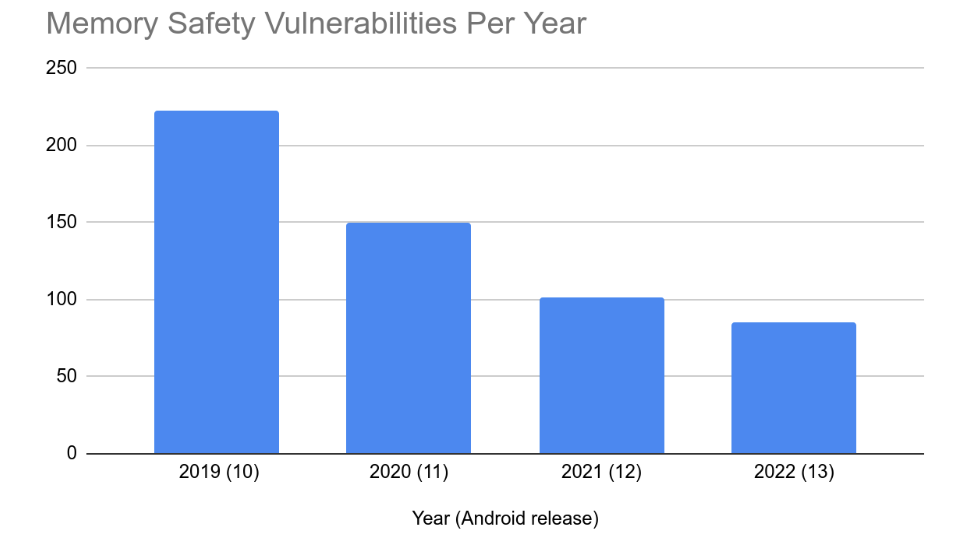 This drop coincides with a shift in programming language usage away from memory unsafe languages. Android 13 is the first Android release where a majority of new code added to the release is in a memory safe language. 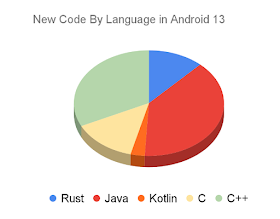 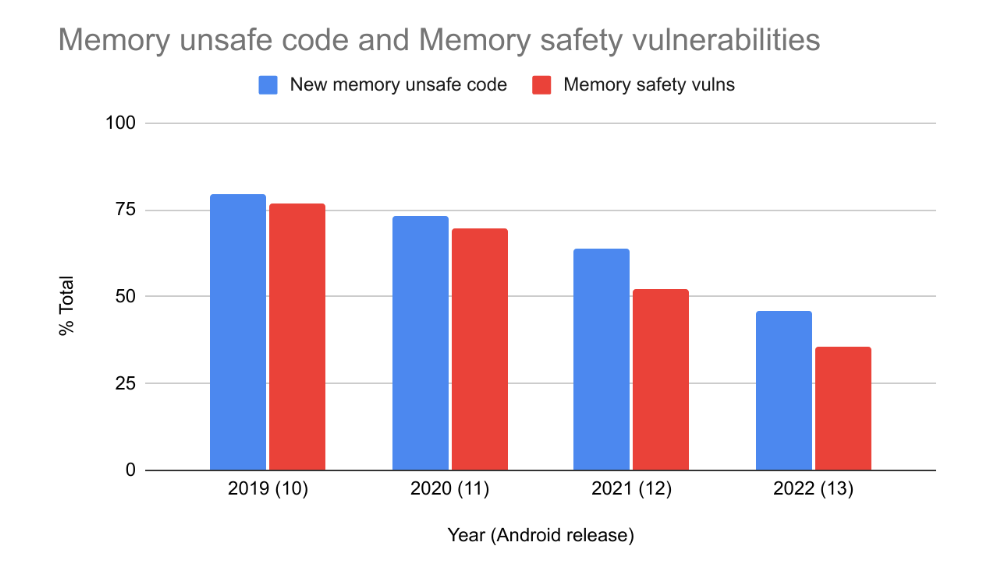 While correlation doesn’t necessarily mean causation, it’s interesting to note that the percent of vulnerabilities caused by memory safety issues seems to correlate rather closely with the development language that’s used for new code. This matches the expectations published in our blog post 2 years ago about the age of memory safety vulnerabilities and why our focus should be on new code, not rewriting existing components. Of course there may be other contributing factors or alternative explanations. However, the shift is a major departure from industry-wide trends that have persisted for more than a decade (and likely longer) despite substantial investments in improvements to memory unsafe languages.

We continue to invest in tools to improve the safety of our C/C++. Over the past few releases we’ve introduced the Scudo hardened allocator, HWASAN, GWP-ASAN, and KFENCE on production Android devices. We’ve also increased our fuzzing coverage on our existing code base. Vulnerabilities found using these tools contributed both to prevention of vulnerabilities in new code as well as vulnerabilities found in old code that are included in the above evaluation. These are important tools, and critically important for our C/C++ code. However, these alone do not account for the large shift in vulnerabilities that we’re seeing, and other projects that have deployed these technologies have not seen a major shift in their vulnerability composition. We believe Android’s ongoing shift from memory-unsafe to memory-safe languages is a major factor.

In Android 12 we announced support for the Rust programming language in the Android platform as a memory-safe alternative to C/C++. Since then we’ve been scaling up our Rust experience and usage within the Android Open Source Project (AOSP).

As we noted in the original announcement, our goal is not to convert existing C/C++ to Rust, but rather to shift development of new code to memory safe languages over time. 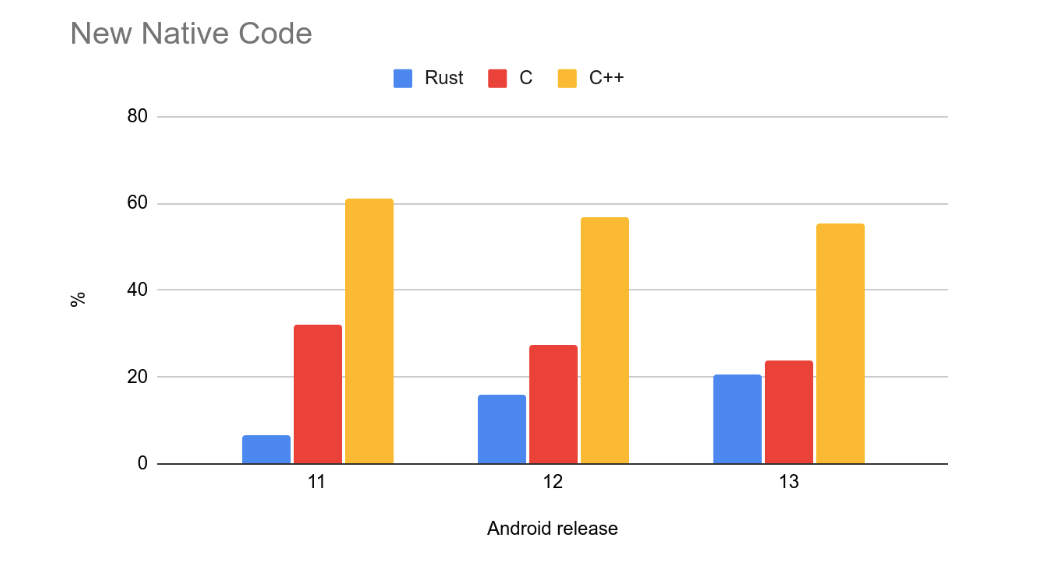 In Android 13, about 21% of all new native code (C/C++/Rust) is in Rust. There are approximately 1.5 million total lines of Rust code in AOSP across new functionality and components such as Keystore2, the new Ultra-wideband (UWB) stack, DNS-over-HTTP3, Android’s Virtualization framework (AVF), and various other components and their open source dependencies. These are low-level components that require a systems language which otherwise would have been implemented in C++.

To date, there have been zero memory safety vulnerabilities discovered in Android’s Rust code.


We don’t expect that number to stay zero forever, but given the volume of new Rust code across two Android releases, and the security-sensitive components where it’s being used, it’s a significant result. It demonstrates that Rust is fulfilling its intended purpose of preventing Android’s most common source of vulnerabilities. Historical vulnerability density is greater than 1/kLOC (1 vulnerability per thousand lines of code) in many of Android’s C/C++ components (e.g. media, Bluetooth, NFC, etc). Based on this historical vulnerability density, it’s likely that using Rust has already prevented hundreds of vulnerabilities from reaching production.

What about unsafe Rust?

Operating system development requires accessing resources that the compiler cannot reason about. For memory-safe languages this means that an escape hatch is required to do systems programming. For Java, Android uses JNI to access low-level resources. When using JNI, care must be taken to avoid introducing unsafe behavior. Fortunately, it has proven significantly simpler to review small snippets of C/C++ for safety than entire programs. There are no pure Java processes in Android. It’s all built on top of JNI. Despite that, memory safety vulnerabilities are exceptionally rare in our Java code.

Rust likewise has the unsafe{} escape hatch which allows interacting with system resources and non-Rust code. Much like with Java + JNI, using this escape hatch comes with additional scrutiny. But like Java, our Rust code is proving to be significantly safer than pure C/C++ implementations. Let’s look at the new UWB stack as an example.

There are exactly two uses of unsafe in the UWB code: one to materialize a reference to a Rust object stored inside a Java object, and another for the teardown of the same. Unsafe was actively helpful in this situation because the extra attention on this code allowed us to discover a possible race condition and guard against it.

In general, use of unsafe in Android’s Rust appears to be working as intended. It’s used rarely, and when it is used, it’s encapsulating behavior that’s easier to reason about and review for safety.

Mobile devices have limited resources and we’re always trying to make better use of them to provide users with a better experience (for example, by optimizing performance, improving battery life, and reducing lag). Using memory unsafe code often means that we have to make tradeoffs between security and performance, such as adding additional sandboxing, sanitizers, runtime mitigations, and hardware protections. Unfortunately, these all negatively impact code size, memory, and performance.

Using Rust in Android allows us to optimize both security and system health with fewer compromises. For example, with the new UWB stack we were able to save several megabytes of memory and avoid some IPC latency by running it within an existing process. The new DNS-over-HTTP/3 implementation uses fewer threads to perform the same amount of work by using Rust’s async/await feature to process many tasks on a single thread in a safe manner.

A drop in severity 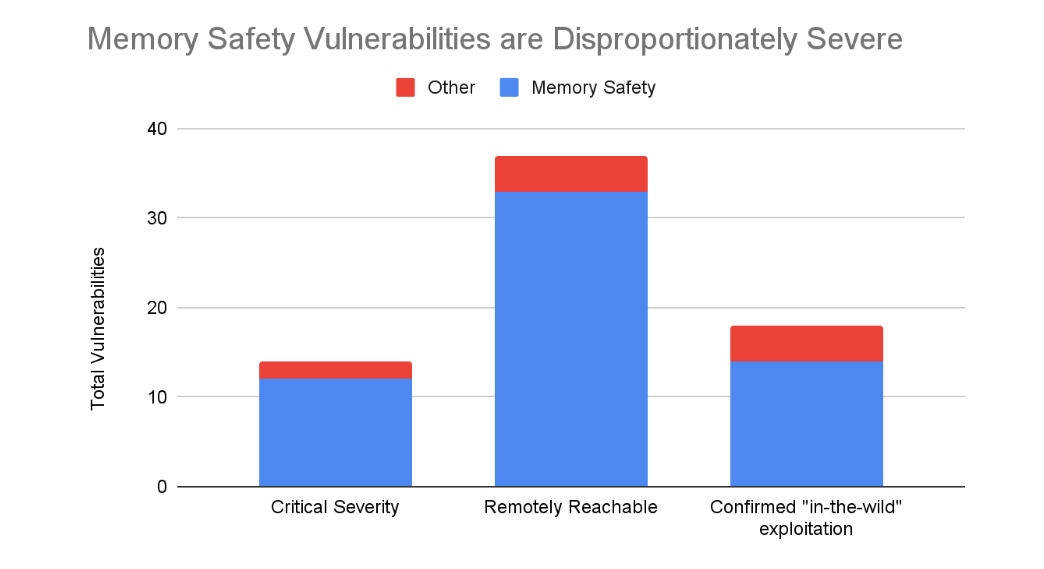 With the drop in memory safety vulnerabilities, we’re seeing a corresponding drop in vulnerability severity. 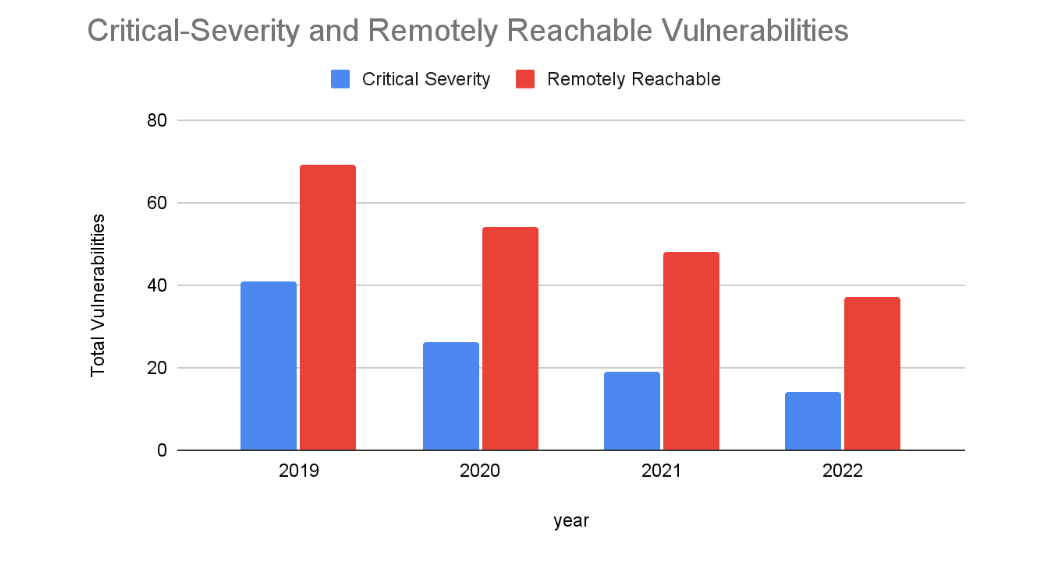 Despite most of the existing code in Android being in C/C++, most of Android’s API surface is implemented in Java. This means that Java is disproportionately represented in the OS’s attack surface that is reachable by apps. This provides an important security property: most of the attack surface that’s reachable by apps isn’t susceptible to memory corruption bugs. It also means that we would expect Java to be over-represented when looking at non-memory safety vulnerabilities. It’s important to note however that types of vulnerabilities that we’re seeing in Java are largely logic bugs, and as mentioned above, generally lower in severity. Going forward, we will be exploring how Rust’s richer type system can help prevent common types of logic bugs as well.

With the vulnerability types we’re seeing now, Google’s ability to detect and prevent misuse is considerably better. Apps are scanned to help detect misuse of APIs before being published on the Play store and Google Play Protect warns users if they have abusive apps installed.

Migrating away from C/C++ is challenging, but we’re making progress. Rust use is growing in the Android platform, but that’s not the end of the story. To meet the goals of improving security, stability, and quality Android-wide, we need to be able to use Rust anywhere in the codebase that native code is required. We’re implementing userspace HALs in Rust. We’re adding support for Rust in Trusted Applications. We’ve migrated VM firmware in the Android Virtualization Framework to Rust. With support for Rust landing in Linux 6.1 we’re excited to bring memory-safety to the kernel, starting with kernel drivers.

As Android migrates away from C/C++ to Java/Kotlin/Rust, we expect the number of memory safety vulnerabilities to continue to fall. Here’s to a future where memory corruption bugs on Android are rare!