Protecting data for the long term with forward secrecy

Last year we introduced HTTPS by default for Gmail and encrypted search. We’re pleased to see that other major communications sites are following suit and deploying HTTPS in one form or another. We are now pushing forward by enabling forward secrecy by default.

Most major sites supporting HTTPS operate in a non-forward secret fashion, which runs the risk of retrospective decryption. In other words, an encrypted, unreadable email could be recorded while being delivered to your computer today. In ten years time, when computers are much faster, an adversary could break the server private key and retrospectively decrypt today’s email traffic.

Forward secrecy requires that the private keys for a connection are not kept in persistent storage. An adversary that breaks a single key will no longer be able to decrypt months’ worth of connections; in fact, not even the server operator will be able to retroactively decrypt HTTPS sessions.

Forward secret HTTPS is now live for Gmail and many other Google HTTPS services(*), like SSL Search, Docs and Google+. We have also released the work that we did on the open source OpenSSL library that made this possible. You can check whether you have forward secret connections in Chrome by clicking on the green padlock in the address bar of HTTPS sites. Google’s forward secret connections will have a key exchange mechanism of ECDHE_RSA.

We would very much like to see forward secrecy become the norm and hope that our deployment serves as a demonstration of the practicality of that vision. 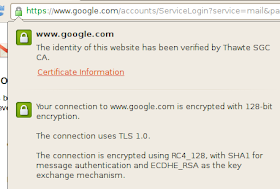 (* Chrome, Firefox (all platforms) and Internet Explorer (Vista or later) support forward secrecy using elliptic curve Diffie-Hellman. Initially, only Chrome and Firefox will use it by default with Google services because IE doesn’t support the combination of ECDHE and RC4. We hope to support IE in the future.)
Jay
Share