Posted by Jan Keller, Google VRP Technical Pwning Master
As we kick-off a new year, we wanted to take a moment to look back at the Vulnerability Reward Program in 2017. It joins our past retrospectives for 2014, 2015, and 2016, and shows the course our VRPs have taken.

At the heart of this blog post is a big thank you to the security research community. You continue to help make Google’s users and our products more secure. We looking forward to continuing our collaboration with the community in 2018 and beyond!

Here’s an overview of how we rewarded researchers for their reports to us in 2017: 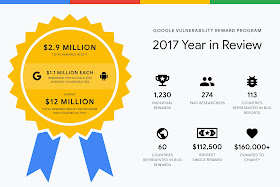 We awarded researchers more than 1 million dollars for vulnerabilities they found and reported in Google products, and a similar amount for Android as well. Combined with our Chrome awards, we awarded nearly 3 million dollars to researchers for their reports last year, overall.

Drilling-down a bit further, we awarded $125,000 to more than 50 security researchers from all around the world through our Vulnerability Research Grants Program, and $50,000 to the hard-working folks who improve the security of open-source software as part of our Patch Rewards Program.

Making Android and Play even safer

Over the course of the year, we continued to develop our Android and Play Security Reward programs.

Today, we’re expanding the range of rewards for remote code executions from $1,000 to $5,000. We’re also introducing a new category that includes vulnerabilities that could result in the theft of users’ private data, information being transferred unencrypted, or bugs that result in access to protected app components. We’ll award $1,000 for these bugs. For more information visit the Google Play Security Reward Program site.

And finally, we want to give a shout out to the researchers who’ve submitted fuzzers to the Chrome Fuzzer Program: they get rewards for every eligible bug their fuzzers find without having to do any more work, or even filing a bug.

Given how well things have been going these past years, we look forward to our Vulnerability Rewards Programs resulting in even more user protection in 2018 thanks to the hard work of the security research community.